Robot Fight Club is a fast-paced game of kids fighting with robots in an abandoned futuristic academy. The robots are tracked on their own mini boards.

The robot boards are designed to look like scruffy metal plates, as if they could be part of the robots they represent. To further build on that idea, the images were made to look as if they were screwed on to the metal. Each robot has its own color, and also has its name stencil-painted on, as if by the kids themselves. On the right side of the board the more game related information is located, including the robot’s critical limit in the form of an amount of critical damage icons. 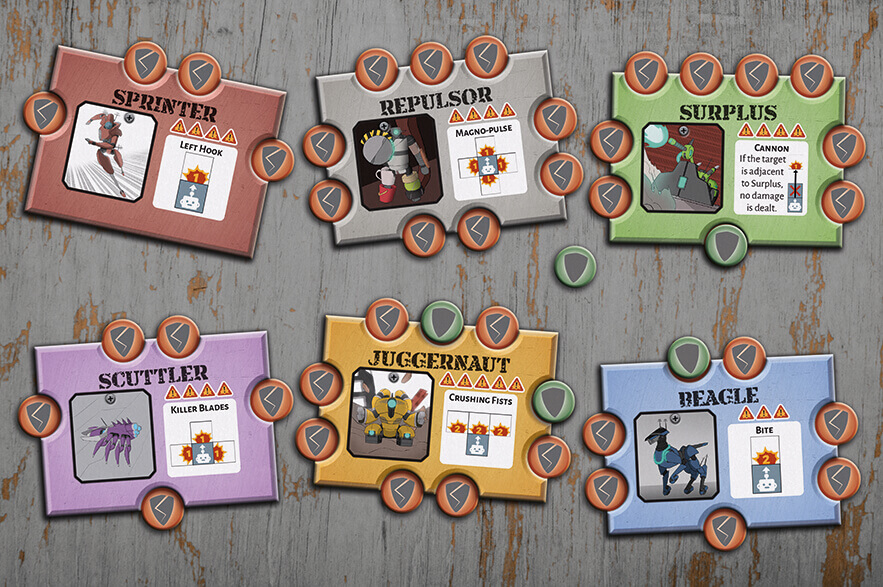 Each robot has its own on-board weapon, shown as a grid with the robot and its facing in the blue square, and where the attack hits as well as how hard on the squares around.

Each robot has a different amount of armor on each of its sides. This is tracked through the armor slots that are made possible because of the double layered boards. Armor tokens are placed in each one at the start of each bout. Printed on the bottom layer board are broken armor icons on a red background. These are revealed when an armor token is removed, making it very clear not only that the armor is not there anymore, but also that the spot is now more vulnerable.