Hexed is, so far, mostly a board game idea, but one that we believe strongly in. The goal of the game is to use hexagonal energy tiles to build shapes matching those on spell cards. When designing the rulebook, the players' experience and ease of learning was the main focus, as we believe it should always be in this type of project. However, we do want to add examples and more images to the rulebook when the game is a bit further along and we’re sure the rules are finalized.

Because Hexed in an in-house project we got to write the rules from scratch, which means we had much greater freedom when designing as well, since we didn’t have to conform to a pre-written text.

When we write rules for one of our own board game ideas we tend to start early. As soon as we want to start testing out the mechanics physically we make sure to write the known rules down. That means we have to change them a lot along the way, but it also means we never forget a rule, or a rule change we made. In terms of designing the rulebook, this means we don’t have to start from scratch. However, the rules can get a little bit mixed up, so the first step in getting the rule text ready for the layout is to rewrite it, as clear as possible, and in the most logical order. 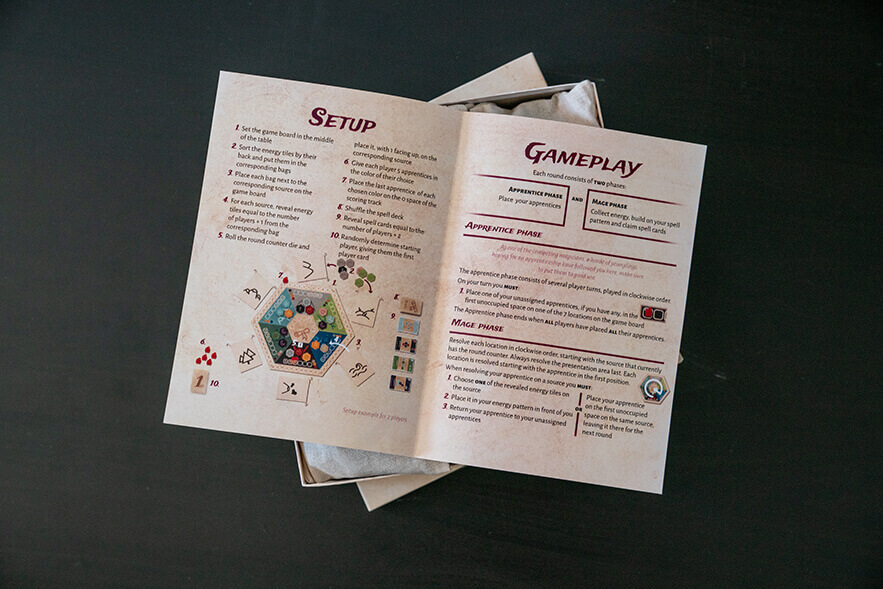 Some thematic text is scattered throughout the rulebook, but it’s clearly differentiated from the rules text by both being italic and a different color (the same color as the headlines though, to make sure everything visually works together).

Even though the rulebook does not have as many examples and explanatory images as we intend it to have later, there are still some images that help explain concepts.

For information that convey a number of steps, especially those where the order matters, numbered lists were used to make it easier to follow.

The components list is a bit cramped, but it contains both the amounts for each component, and images.

Different types of lines are used to separate different objects in the rules.