When writing and editing rules, our main focus is making the rules as clear as possible to make learning the game easier, as well as making sure no rules are ambiguous. We want players to be able to pick up a rulebook and easily find the answer to any question, without there needing to be a debate on how to interpret the rules. 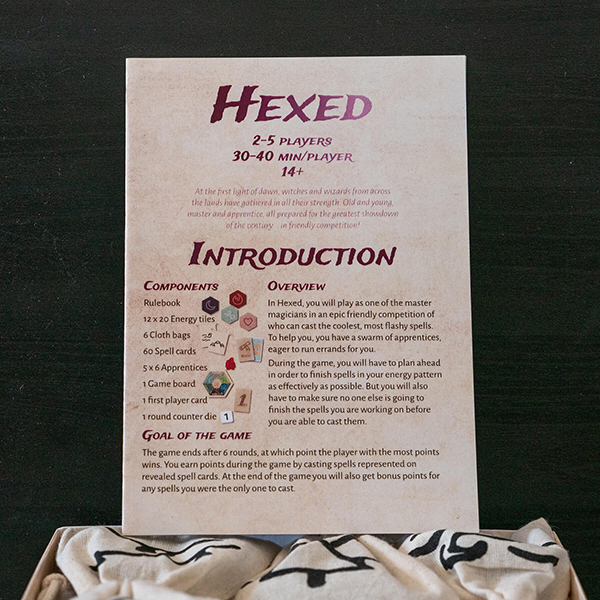 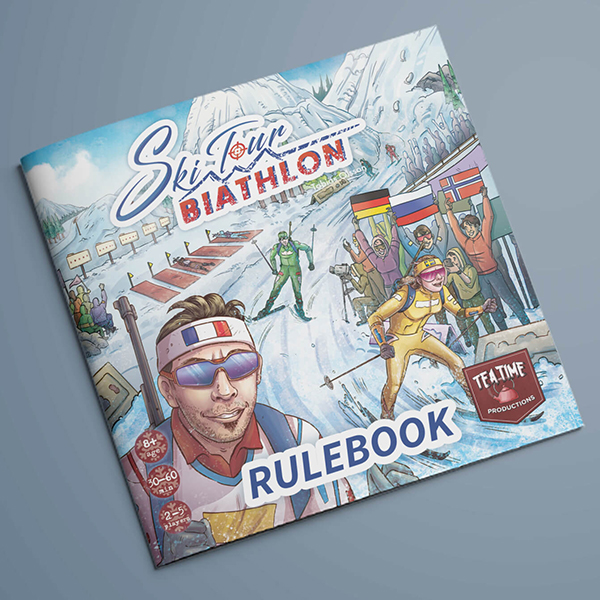 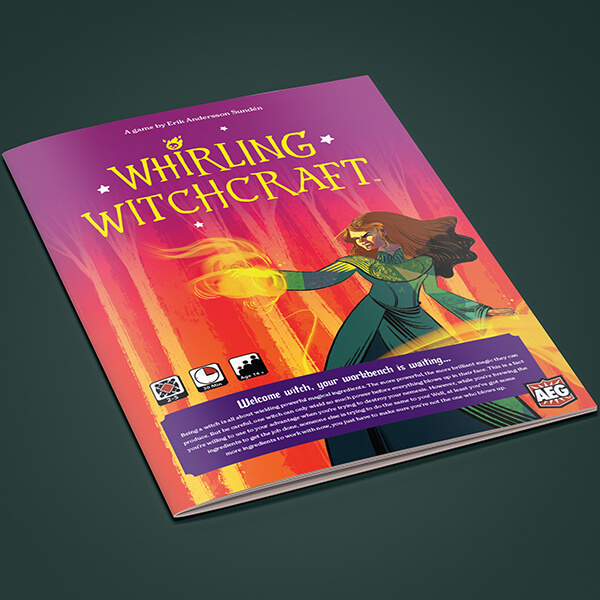 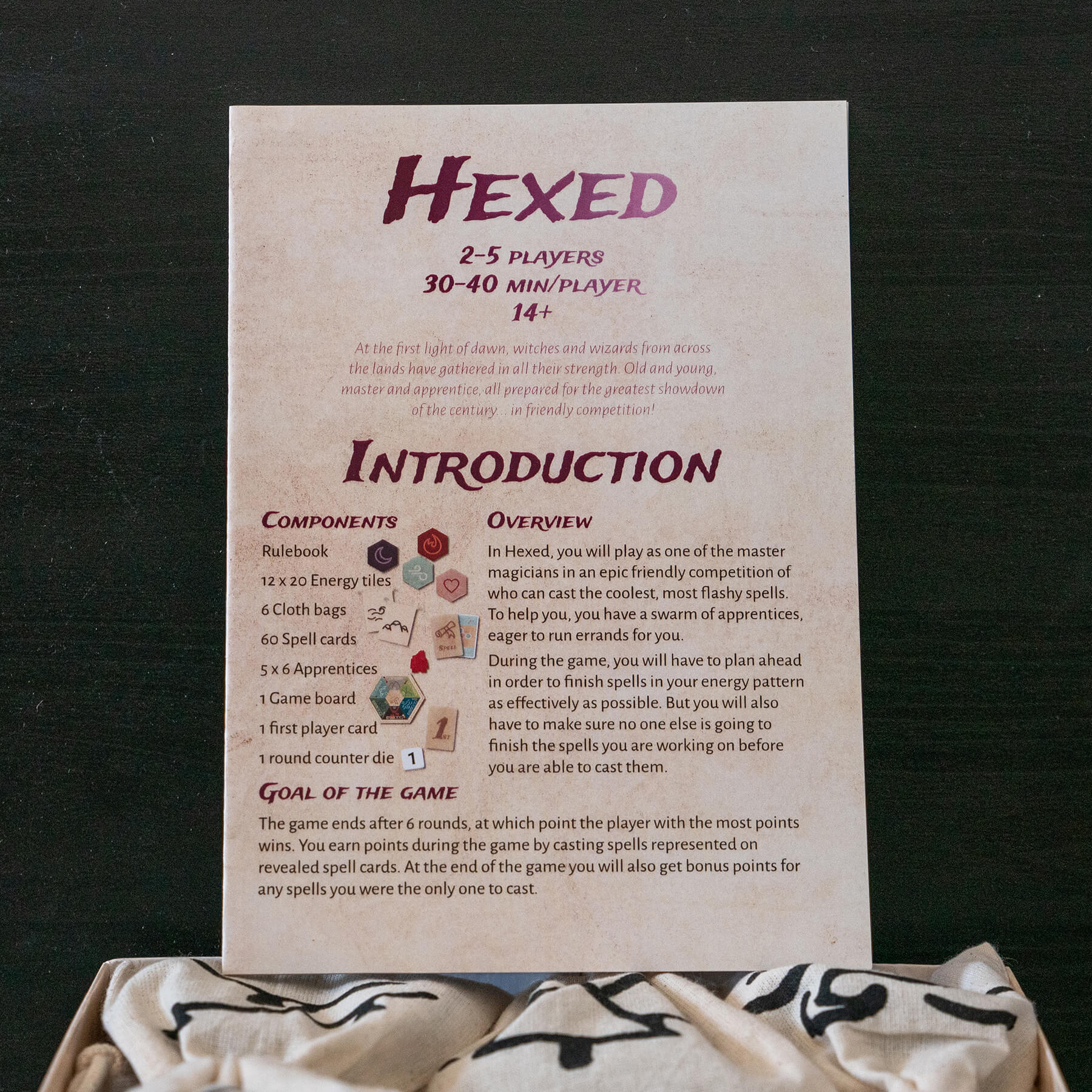 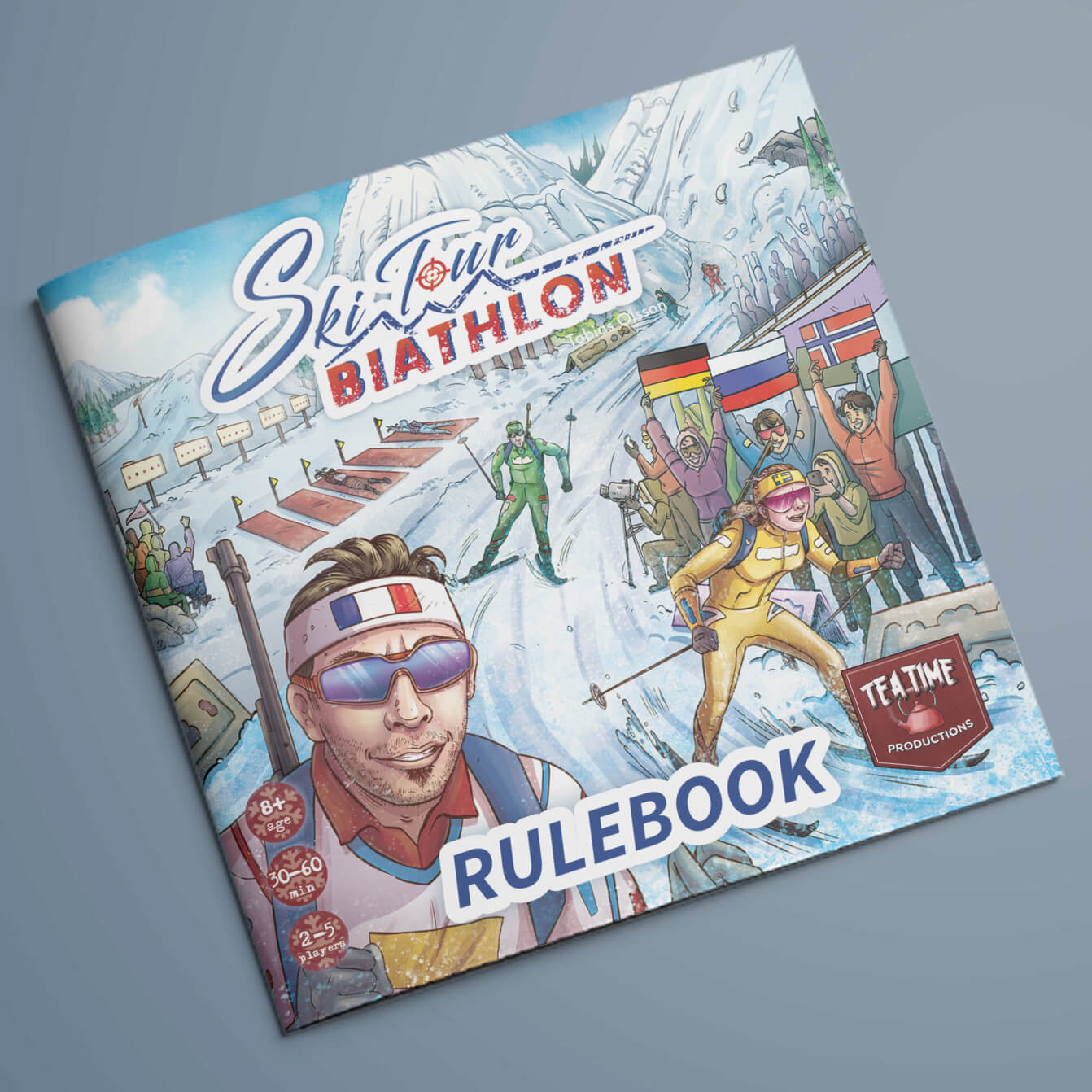 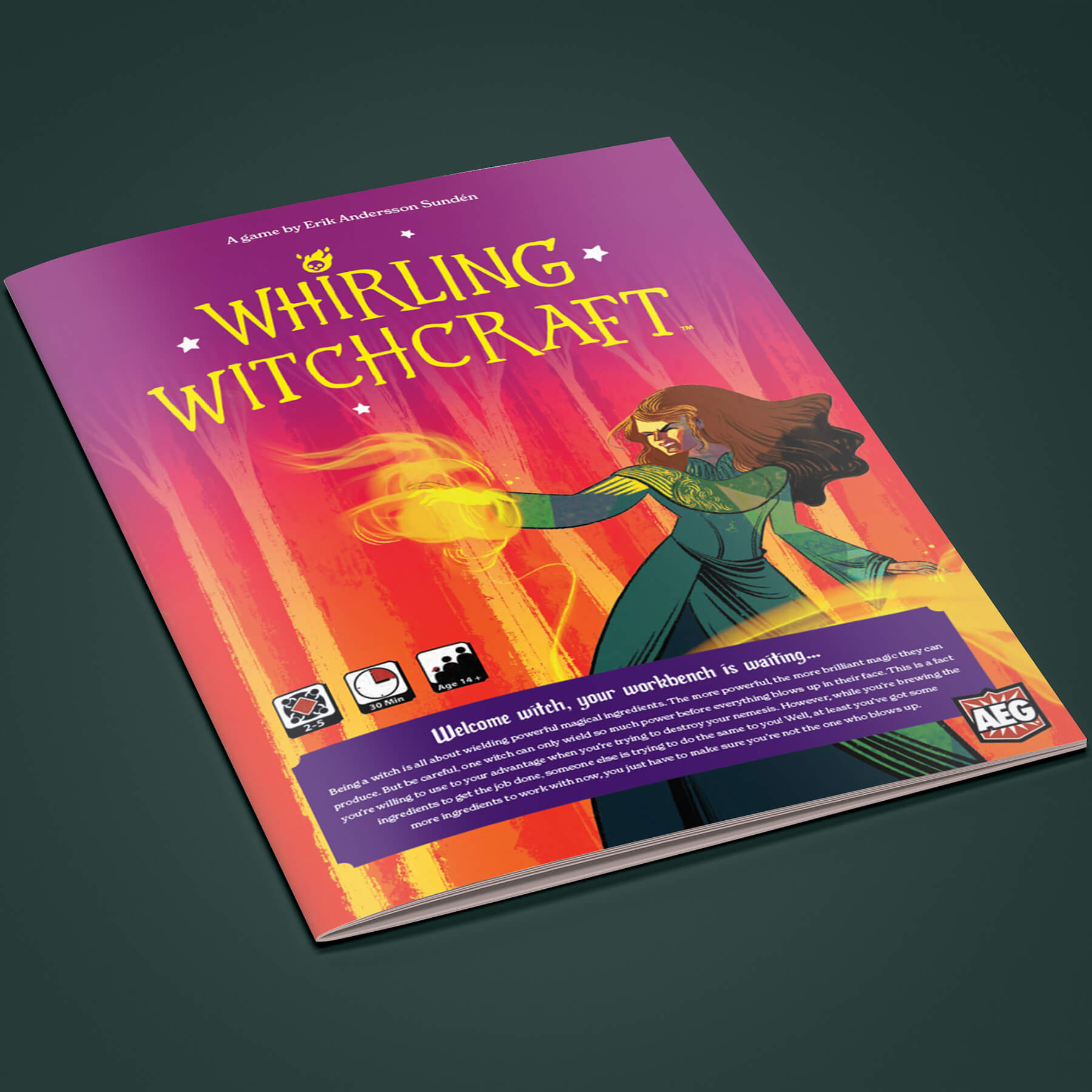 
Not every rules text is the same, and when writing rules one size does not fit all. However, there is a general structure that we aim to follow with every rulebook:

A thematic introduction is used to immerse the players in the world of a particular game. If done correctly (and if the game mechanics allow for it) it can also be used to tell players something about the gameplay and/or the goal of the game, however vague.

In the thematic introduction for Whirling Witchcraft we hint at the fact that too much magical power is actually a bad thing that may cause you to lose the game, as well as the fact that you have a nemesis and try to overwhelm them with ingredients (including that someone different will be sending you ingredients).

We like to start off rulebooks with the Objective of the game. Here, we describe the “heart” of the game, what the main mechanic is and how you win. This is important to start with because it will give players a general idea of the game and what the goal is, so they can have that in mind when reading the rest of the rules. If you have no idea how to win, it’s hard to take in the rules since you’ll be less invested and won’t understand how certain actions will help you win the game. Sometimes We separate this into an Overview and the Goal of the Game.

When possible, we do prefer to explain the components as they come up in the rules, but in some games you sort of need to understand most components from the start. In those cases, we add a quick summary of the components at the start of the rulebook. We usually try to only do this if there are not that many components in the game, as it can be overwhelming to start with a component anatomy in a rulebook with lots of complicated components. 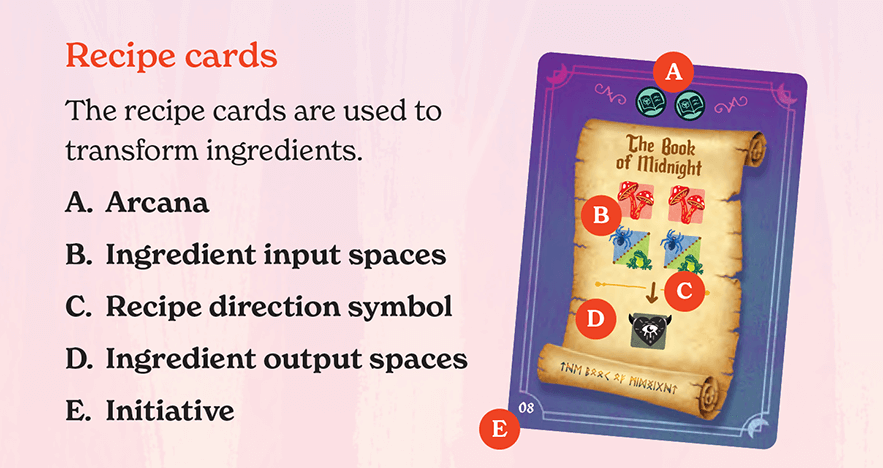 We love numbered setup lists. We prefer to keep each list item short and concise, giving just enough information so the players can get one component (or component type) set up before moving on to the next list item. That way, the players won’t have to keep lots of different information in their head while doing one setup step, or have to search for where in the text they’re supposed to continue. 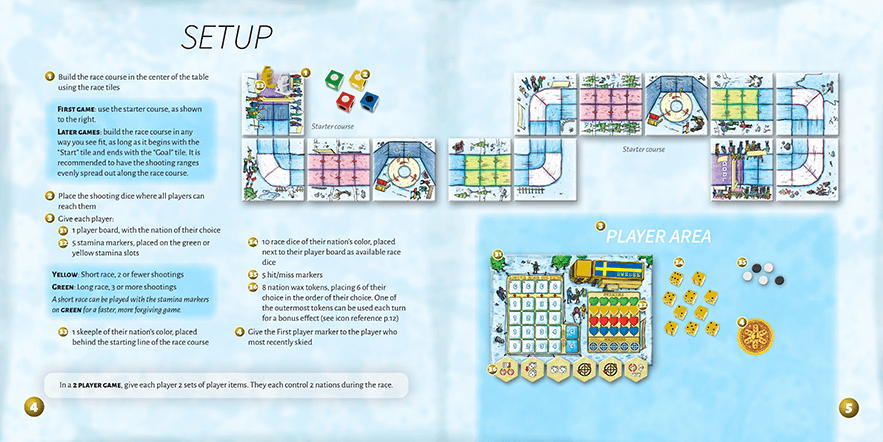 Writing the How to play-section of a rulebook is where it really gets interesting; we have to look closely at the game which we’re writing the rulebook for, because there is no one-size-fits-all solution for that section. One thing we usually strive for though, is to explain the rules in the order that they occur naturally in the game, while also making sure that players get enough of an overview that they understand what they’re learning. When applicable, we use lists to convey how to do certain things, because a list of steps is easier to follow than those steps written as running text.

When writing the rules for a game with different phases (or steps, or other ways of dividing a round) we prefer to start off with a short description of each phase. This is to give the players an overview of the rules before going into more detail, so players have a framework to fit all the detailed rules into. Then, within each phase or step, we make sure to explain the broadest concept first and go into details and edge cases last.

Ski Tour: Biathlon is played in two different phases, which we introduced briefly before going into the details of the first phase. We write the general instructions as lists, with more detailed information written to be placed in boxes that can easily be skipped when just double checking the order of what to do in each phase. 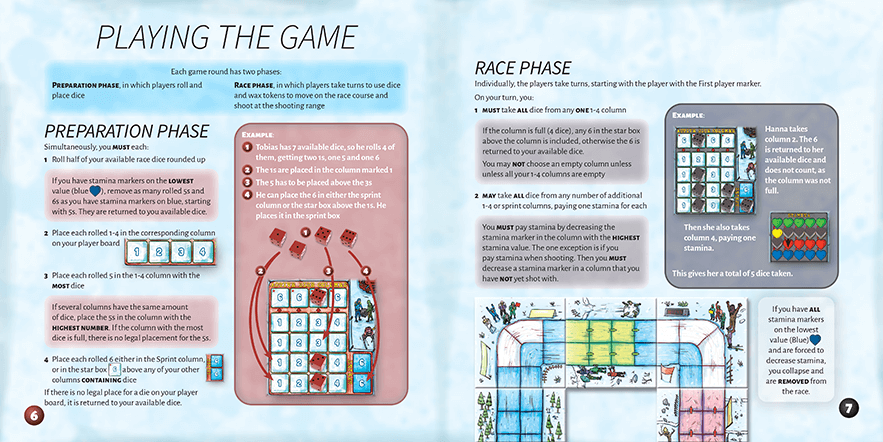 The specifics regarding the game end should be placed at the end of the rulebook. We like to start off with what triggers the game end, as well as any other information that affects the timing of the game end, like if you’re supposed to play out the round or maybe even play a full round after the trigger. Then we explain how to calculate the score if there is one, and end with how to determine the winner including tiebreakers.

When you have cards or other components that contain rules that may be contradictory to the main rules, or that may just need some more clarifications than there’s room for on the component itself, it’s a good idea to include explanations for how to interpret those components. This can be done in an appendix or at the back of the rulebook.